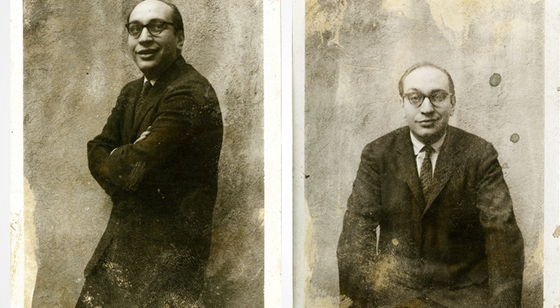 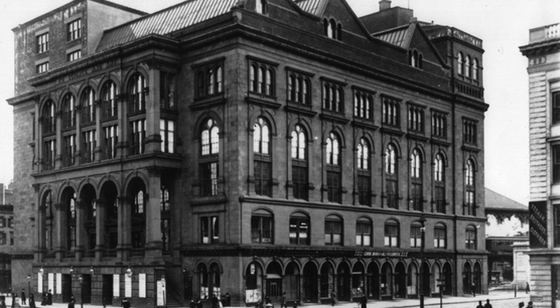 Milton is forever grateful to go to one of the best schools in the world to study design. 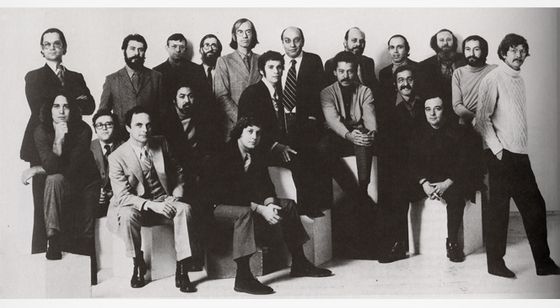 In 1954, Milton Glaser, along with Reyonld Ruffins, Seymour Chwast, and Edward Sorel, founded Push Pin Studios. For twenty years Glaser, together with Seymour Chwast, directed the organization, which exerted a powerful influence on the direction of world graphic design, culminating in a memorable exhibition at the Louvres Museum of Decorative Arts in Paris. 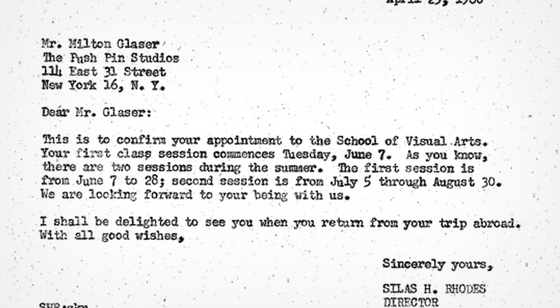 Glaser has been teaching at SVA for over half of a century. He thinks it helps him focus and prevent senility. 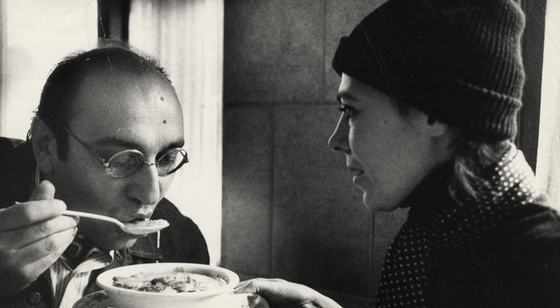 Within months after their marriage, the Glaser's left for a year's sojourn in Italy. Here, Shirley is encouraging Milton to taste her zuppa di fagioli. He seems to be enjoying it. 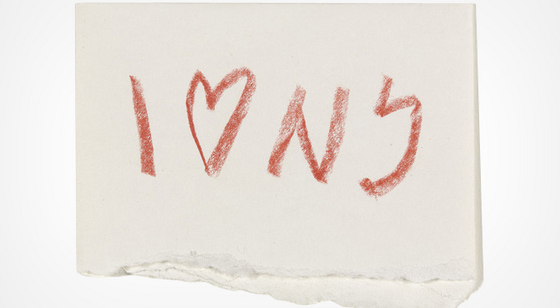 The original taxi sketch, in the Museum of Modern Art archive, for the logo that obliterates Chinatown. 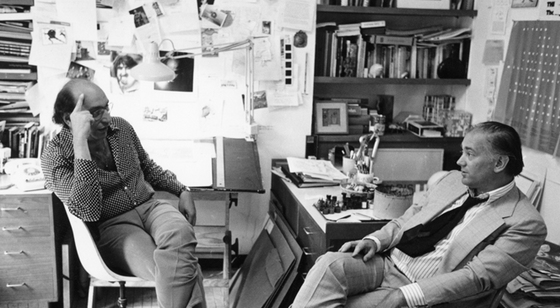 In 1968, Glaser and Clay Felker founded New York Magazine, where Glaser was president and design director until 1977. The publication became the model for city magazines, and stimulated a host of imitations. 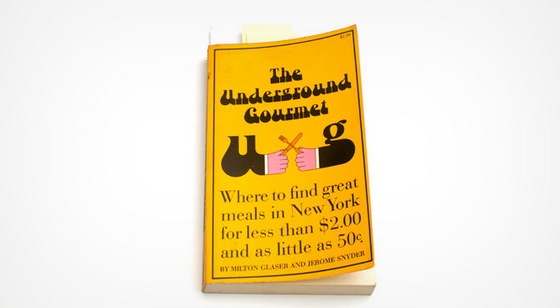 For six or seven years, Jerome Snyder and Glaser wrote The Underground Gourmet, a guide to cheap restaurants in the city. It was one of the most popular columns in New York Magazine because everyone in the city is always looking for cheap, good eats. It is still a regular column but Glaser doesn't write it any longer.

If Apples Had Teeth 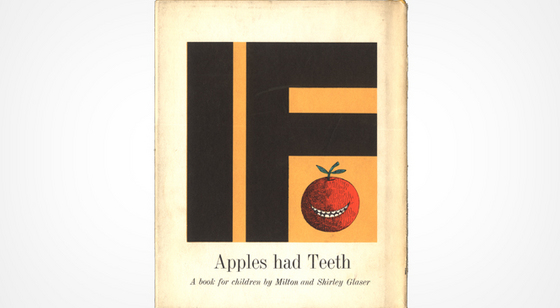 The first children's book that Glaser and his wife Shirley worked on. 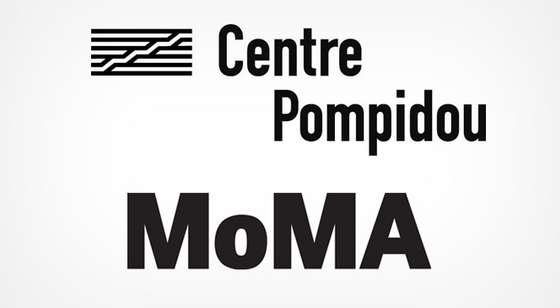 Milton Glaser’s artwork has been featured in exhibits worldwide, including one-man shows at both the Centre Georges Pompidou in Paris (1977) and the Museum of Modern Art in New York (1975)

Milton Glaser, Inc. was established in 1974 in Manhattan, and is still producing work in a wide range of design disciplines, including: corporate identities (logos, stationery, brochures, signage, website design, and annual reports), environmental and interior design (exhibitions, interiors and exteriors of restaurants, shopping malls, supermarkets, hotels, and other retail environments), packaging (food and beverage packaging), and product design. Some of the firm's current clients include The Brooklyn Brewery, Jet Blue, Target, Coach, Trump, Eleven Madison Park, Alessi, Juilliard, The Rubin Museum of Art, Theatre For A New Audience, The School of Visual Arts, Bread Alone, and Philip Roth, amongst others. 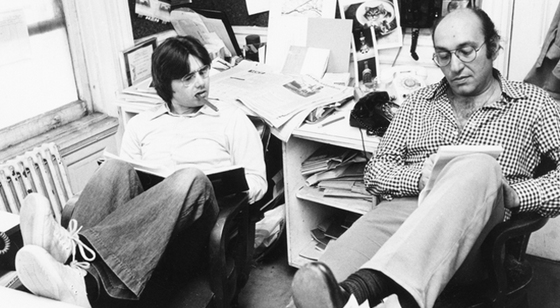 In 1983, Glaser teamed with Walter Bernard to form WBMG, a publication design firm located in New York City. Since its inception, they have designed more than 50 magazines, newspapers and periodicals around the world. WBMG has been responsible for the complete redesigns of three major newspapers: The Washington Post in the U.S., La Vanguardia in Barcelona, and O Globo in Rio de Janeiro. It has consulted on design projects for The Los Angeles Times, The Boston Globe, The Dallas Times Herald, The East Hampton Star, the New York Daily News and the National Post (Canada). Magazine clients in the United States include: Time, U.S. News & World Report, Adweek, Brill’s Content, Crain’s Chicago Business, Family Circle, Golf Digest, The Nation, Autoweek, Biography, USA Weekend, PC Magazine and Wine Spectator. WBMG has created original prototype designs for Manhattan, Inc., Windows, The Journal of Art, and ESPN, the Magazine. In Europe, WBMG has developed and created the original format for Alma (a women’s service magazine) and Zeus (a cultural newspaper). The firm has redesigned L’Express, Lire (a French literary magazine), Jardin des Modes (women’s fashion), L’Espresso in Rome and Business Tokyo in Japan. WBMG has also designed the American Express Annual Report for three years, as well as several books, including Steve Salmieri’s Cadillac and Muhammad Ali: Memories for Rizzoli and ESPN’s SportsCentury for Hyperion. Walter and Milton are co-creators of "Our Times", an illustrated history of the 20th century, published in 1995. 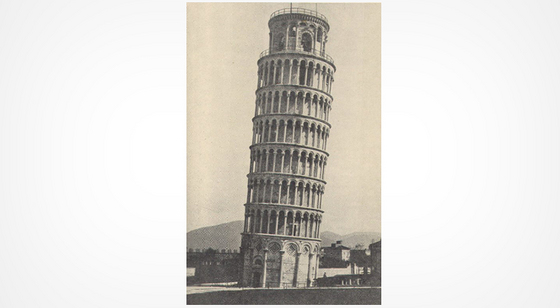 A show of Glaser's work was scheduled in Pisa, at the Municipal Museum. The day Glaser and friends arrived, the first floor of the museum was under two inches of water with live electrical wiring running randomly through the space. The workman assured everyone that the problem would be fixed in a couple of hours. No one believed him and everyone went out to dinner at a first class Pisan restaurant. The show never opened but the dinner was great. 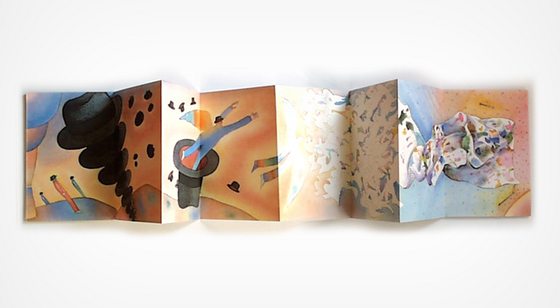 Glaser and the French artist Jean Michel Folon were great friends over a long period of time. They decided to celebrate that friendship by creating a book where one would start a drawing and the other would finish it. It's an accordion fold that celebrates an affectionate relationship. 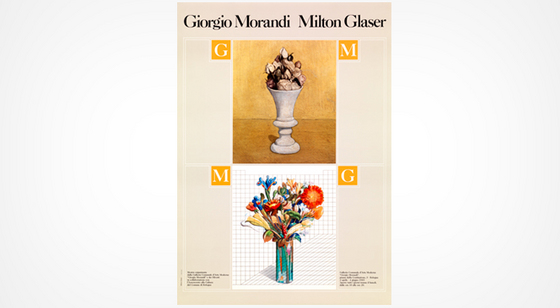 Glaser's mentor, Giorgio Morandi, shared a show with him, sponsored by Olivetti, in Bologna in 1989. 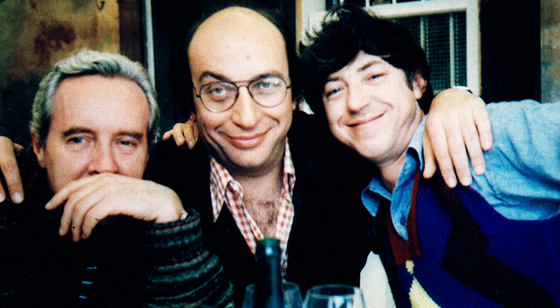 On the left, Giorgio Soavi, the Italian novelist and bon vivant, who also ran Olivetti's Corporate Communications. He was really a poet, not an advertising man and had become a deep personal friend of Glaser's and Folon's.

The National Medal of the Arts 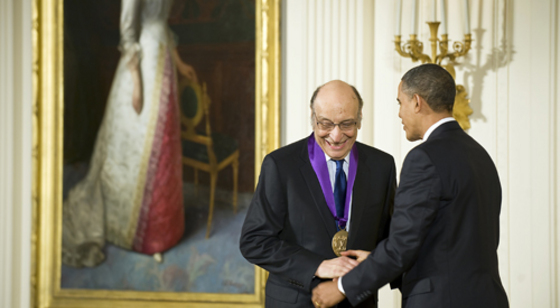 "These individuals and organizations show us how many ways art works every day. They represent the breadth and depth of American architecture, design, film, music, performance, theatre, and visual art," said NEA Chairman Rocco Landesman. "This lifetime honor recognizes their exceptional contributions, and I join the President and the country in saluting them."